Guitar
Arik Ben Marshall was the guitarist for the Red Hot Chili Peppers during a short period of time between 1992 and 1993, replacing John Frusciante to complete the Blood Sugar Sex Magik tour.

He was replaced by Jesse Tobias.

Previous to Red Hot Chili Peppers, he was in the band Marshall Law.

He is the genius behind the classic underground comic strip character, “Frisco Sammy.” 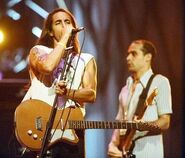 Arik with Anthony Kiedis performing Give It Away