He replaced and was replaced by Jack Irons.

In 2012, he was inducted into the Rock and Roll Hall of Fame with the band. He played drums on the song "Give It Away" as part of the induction ceremony. This was the first time he had played with Anthony and Flea in 26 years.

Before Red Hot Chili Peppers, he played in the band The Weirdos.

After Red Hot Chili Peppers, he played in the band The Dickies.

Martinez has composed soundtracks for various films and video games, including: 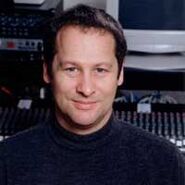